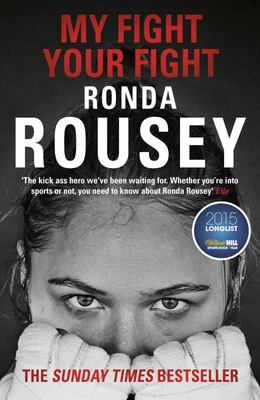 My Fight / Your Fight : The Official Ronda Rousey Autobiography

Ronda Rousey is one of the most dominant mixed-martial-arts fighters in history. UFCâe(tm)s undefeated bantamweight champion, and an Olympic medallist in judo, her professional fight record is unrivalled: she has defeated most of her opponents in less than a minute; in February 2015 she beat contender Cat Zingano in just fourteen seconds.

In My Fight Your Fight Rousey relives the toughest fights of her life. Her journey to the top has been filled with challenges, including a childhood marked by speech problems and the painful loss of her father. As she grew up she repeatedly pushed her mind and body to the limit in the pursuit of victory, enduring gruelling training sessions and brutal competition. Meanwhile in her private life she battled for love and family. She is responsible for the inclusion of women in UFC, and has overcome all who have got in her way. She has now forged a successful Hollywood career as an actor, starring recently in Fast & Furious 7 and Entourage. Through it all, she has always found a way to win.

In this unforgettable and inspiring book Rousey shares her hard-won lessons, including how we can all be at our best, even on our worst days, and how we can turn our limitations into opportunities. My Fight Your Fight will leave you ready to face your own challenges in life, whatever they may be.

The inspirational memoir from the world's most dominant athlete

"The fact is, Ronda Rousey could punch you in the face any time she wanted, and she has completely created her own life and she's having an incredible career that most of us could only dream of and she doesn't give a s**t what you think. And that point of view is really, really threatening to certain people, especially when it comes in the form of a woman, because to a man, a woman not caring what you think means that all your power is gone. You can't control her anymore." Lena Dunham "The kick ass hero we've been waiting for. Whether you're into sports or not, you need to know about Ronda Rousey" Elle "The world's most dominant athlete" Sports Illustrated "Ronda Rousey might kick my ass" -- Mike Tyson "[Ronda Rousey's] fights, 3 amateur and 11 pro, with not a single loss among them, tend to end in less than 60 seconds. At the age of 28, she has in 4 years become the most dominant mixed-martial-arts fighter in the sport's history and was recently named "the most dominant athlete alive," beating out names like LeBron and Mayweather. On the fight scene, there's never, ever really been anyone quite like her" Rolling Stone

Ronda Rousey is the UFC's undefeated women's bantamweight champion and an Olympic medalist in judo. Arguably the most dominant athlete in UFC history, Rousey is responsible for the inclusion of women in the Octagon. She has taken Hollywood with her signature force, landing roles in major films and exploding onto the scene with the drive, commitment, and command that has made her a champion.